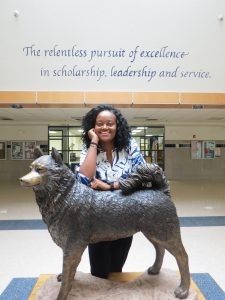 As a rule, the Milken Educator Awards, which according to their website ‘targets early-to-mid career education professionals for their already impressive achievements and, more significantly, for the promise of what they will accomplish in the future’, do not inform the awardees that they are being considered. Recipients are caught by surprise when their names are announced at emotional all-school assemblies in front of cheering students, proud colleagues, distinguished officials and the media.

Debreon Davis’ secret to stardom is centered on establishing high levels of expectations and personal accountability of her students and faculty. The students and faculty on their part strive to meet her expectations, ultimately leading to success. Davis was just recently appointed the new principal at Edmond North High School. She is the immediate former Assistant Principal of the Freshman Academy at Edmond Memorial High School, where she highly successful in helping freshmen transition into high school through collaborative and all-inclusive initiatives that included all stakeholders. She even went an extra mile of visiting eighth-grade teachers at the feeder schools to identify struggling students in math and reading, and developed appropriate academic strategies for their success once they entered high school. Student-centered practices are hallmarks of Davis’ leadership, which she has already begun replicating at Edmond North High School.

“Great educators like Debreon Davis know that a rigorous education awakens the mind, but that in order to experience this great awakening, the mind needs a safe, encouraging and challenging space to thrive,” said Lowell Milken. “With her emphasis on personal discipline and growth, Debreon impresses upon students the importance of meeting challenges head on and learning from whatever comes your way.”

Principal Davis is a master her own art; from detailed data analysis of student acumen to teacher collaboration, from technology and STEAM integration to remediation initiatives, students of all learning abilities improved their academic performance and attitude under her leadership. She enhanced the “Bulldog Mentors” program pairing freshman with upperclassmen, who share their secrets to success.

“Effective principals create and reinforce the culture of a school to ensure teachers and students can excel in a supportive, trusting environment,” said Hofmeister. “By any calculation, Debreon Davis is an exceptionally effective leader who is wholeheartedly dedicated to service. Her commitment to high expectations and belief that every child can achieve have earned respect from students and their families, her colleagues and the Edmond community.”

Davis chairs the professional development committee and helps set the tone district-wide for what educators will do to meet Edmond schools curriculum goals. She is also actively involved in community development. She mentors pre-teens and teens through the local Young Life group and during summer camps in other states. Davis also volunteers as a board member of the Oklahoma City Dream Center, a non-profit offering people isolated by poverty access to services that meet basic needs and get them back on their feet as well as providing preventive programs for at-risk youth. Davis earned her Bachelor of Arts degree in Psychology from University of Central Oklahoma in 2008, and her Master of Arts degree in Educational Leadership from Southern Nazarene University in 2011.

In addition to the $25,000 prize and public recognition, Davis’s honor includes membership in the National Milken Educator Network, a group of more than 2,700 top teachers, principals and specialists dedicated to strengthening education. The 2017-18 recipients, who are 44 in number, will attend a Milken Educator Forum in Washington, D.C., March 20-23, 2018. Educators will have the opportunity to network with their new colleagues and hear from state and federal officials about maximizing their leadership roles to advance educator effectiveness.

The Milken Educator Awards, an initiative of the Milken Family Foundation, founded 30 years ago have rewarded or funded top educators all over the country with more than $138 million in funding, including $68 million in individual $25,000 awards, the rest being devoted to the overall Awards initiative, which includes powerful professional learning opportunities throughout recipients’ careers. Many have gone on to earn advanced degrees and be placed in prominent posts and on state and national education committees.

The Awards alternate yearly between elementary and secondary educators. Unlike most teacher recognition programs, the Milken Educator Award is completely unique: Educators cannot apply for this recognition and do not even know they are under consideration. Candidates are sourced through a confidential selection process and then are reviewed by blue ribbon panels appointed by state departments of education. The most exceptional super teachers are recommended for the Award, with final approval by the Milken Family Foundation.

Past recipients have used their Awards to fund their children’s education or their own continuing education. Others have financed dream field trips, established scholarships and even funded the adoption of children. The Milken Educator Awards have been hailed by the Teacher Magazine as the ‘Oscars of Teaching’ that celebrates super teachers across the country.
By
Michael Omwenga Manyibe
EduMonitor