Parents as Guilty as Kids on Too Much Screen Time

Parents as guilty as kids on too much screen time. According to a new research-OnePoll survey – that was carried out by The Genius of Play, a nonprofit initiative dedicated to raising awareness of play’s vital role in child development, parents spend nearly the same amount of time on devices as they do with their kids.

The results of the OnePoll survey of 2,000 parents of school-aged children ages 5-18 suggest that families should be finding more screen-free ways to spend time together. Half of the survey’s respondents have been asked by their child to put their phone away, and 79 percent believe that their relationship with their children would benefit if everyone spent less time on devices.

“Screens and tech can make up some of your playtime, but parents should be mindful of creating balance,” says Ken Seiter, EVP, marketing communications at The Toy Association, the organization that spearheads The Genius of Play. “A wide variety of toys and games will help create rich childhood memories, lead to optimal physical, cognitive and social-emotional development, and nurture critical skills like creativity and out-of-the-box thinking.”

Parents are aware that excessive screen time is a problem. Seventy-four percent worry that their child spends too much time staring at a screen and the majority limit their kids’ screen time to about two hours per day. However, when it comes to their own use of devices, setting a limit is easier said than done. Survey results revealed:

• Sixty-two percent of parents admitted to spending too much time on their cell phone while with their kids.

The survey also found that while parents worry about the amount of screen time kids are getting, technology is now an integral parenting tool.

• The majority (83 percent) agree that screens and technology are necessary when raising a child in this day and age.

• Parents use screen time to keep their child occupied (58 percent), as a reward (53 percent) and to help their child calm down when they’re upset (52 percent). In addition, taking screen time away is used as a consequence (63 percent).

“Parents often complain that it’s hard to get kids to put down devices, but they can set a positive example by swapping some of their own screen time for other types of play,” says Seiter.

Experts at The Genius of Play recommend setting aside dedicated periods of the day for arts and crafts, word games, role play, board games, sports, puzzles, charades and other screen-free activities to maximize quality time for families, which will benefit both kids and adults.

Omnipresent digital devices are a fact of modern life. However, with commitment and creativity, families can spend a greater portion of their free time without screens. (Statepoint) 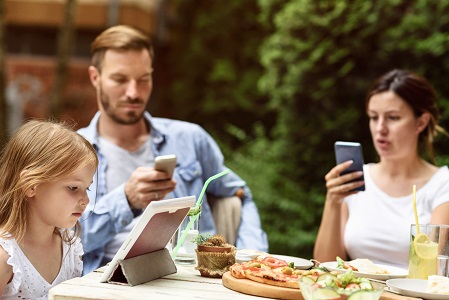