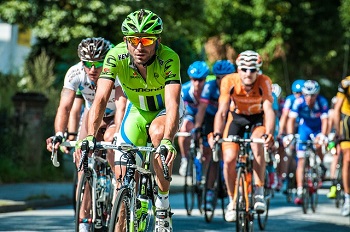 The bicycle race, like a teacher’s life, is both a marathon and a sprint. Cyclists understand the need for rest. Teachers should, too.

In 2012, I finished my fifth year of teaching freshman English to low-performing, high-needs students. I also became a father, recovered from major surgery, coached varsity baseball and applied for National Board certification. My students and I stumbled to the finish, and come June I was ready to spend the summer looking for a new line of work.

Then, in July, the Tour de France began and made everything better.

I was fascinated by the teams of riders covering more than 2,100 miles in 23 days, and enjoyed the aerial views of medieval castles, oyster beds, green pastures, city roundabouts and mountain towns.

Maybe it’s the unique blend of age, experience and talent that successful cycling teams possess that closely resembles a great faculty. Or that, like a 180-day school year, the Tour is both a marathon and a sprint. Near the end of an hours-long stage, or leg, riders sprint to the finish, hitting speeds of more than 40 miles per hour in an attempt to get there mere seconds ahead of the pack — known in the cycling world as the “peloton.” Or perhaps because my workload was like that peloton — a nebulous blob of bikes setting the pace for the day. The most ambitious riders often break away, pushing as hard as they can to win that day’s stage, only to run out of gas and be swallowed by the mass minutes before reaching the finish line.

For three weeks I stopped updating my resume and ignored the long list of lessons to rewrite. I didn’t think about my school or my students. I woke up, watched the tour with my baby boy and changed diapers during commercial breaks.

By the time the Tour ended, I’d figured out why my year had been so rough. Navigating students, athletes, parents, administrators and personal issues forced me to go too fast, too often. There had been moments of separation, when I was ahead of my lesson planning, grading and coaching duties and totally engaging my students and family. But then I’d blow a tire, drift back to the peloton and just hope to finish. I tried to do too much, and as a result didn’t do any of it very well.

Metaphors aside, I realized I still loved teaching and students. I enjoyed my school and didn’t want to work anywhere else. But my health and family demanded more of my time and attention than before. Rather than make sacrifices to accommodate them, I had taken on more than I could handle.

That fall I returned to my school, but stepped away from coaching. I refused all invitations to join new activities and organizations, and instead focused my efforts on my current students, and leaving work on time. My teaching flourished and my health improved. I enjoyed my job again, and my family enjoyed me.

Professional cyclists understand the need for rest and recovery. They plan a “deload” phase in their training each year to prepare their bodies for the increased demand of the next competitive season. Following a long spring and summer of racing, the riders spend six to 12 weeks practicing “active rest.” They train less frequently and even leave the bike at home to hike, swim, run or lift weights instead. Teachers, with a concrete start and end to each year, have a perfect opportunity to deload during the summer, but I lacked the discipline to do it until I found the Tour.

Now, I spend my first two weeks of summer thinking back on the school year and making a massive “to-do” list.

When the Tour arrives, I put the list away. For three weeks my sons and I eat breakfast together, watch the race, then move on to a park, pool or museum. I think about work, but do nothing about it.

By August I have a clear picture of my successes and failures. I’ll spend the time I have left completing the tasks on that long to-do list that are most essential. A couple weeks later I’ll go back to school recharged and excited for another year.

The Tour de France won’t enhance and extend every teacher’s career like it did mine, but learning to respect limitations and find an off switch will. We’ve crossed our finish line, said goodbye to one batch of students and await the next to arrive. With little time to pause and think during the school year, take your recovery seriously this summer. Know that slowing down to rest and rethink your approach is the right thing to do.

This article was originally published by Bright. Bright is made possible by funding from the Bill & Melinda Gates Foundation. Bright retains editorial independence. The Creative Commons license applies only to the text of this article.

Article Name
A Teacher's Inspiration: How the Tour de France Saved My Teaching Career
Description
The bicycle race, like a teacher’s life, is both a marathon and a sprint. Cyclists understand the need for rest. Teachers should, too.The Tour de France won’t enhance and extend every teacher’s career like it did mine, but learning to respect limitations and find an off switch will.
Author
Bryan Christopher
EduMonitor